To share your memory on the wall of Artis Young, sign in using one of the following options:

Print
Artis Douglas Young was born in Arkansas August 20, about 1938 to Will Young and Nellie Carter Young Billings.

Artis was raised by his beloved Great Aunt, Etta Mae Jackson and his Uncle WIll and surrounded with a large extended family i... Read More
Artis Douglas Young was born in Arkansas August 20, about 1938 to Will Young and Nellie Carter Young Billings.

Artis was raised by his beloved Great Aunt, Etta Mae Jackson and his Uncle WIll and surrounded with a large extended family including his Grandmother, Daisy Carter. Artis graduated Phelix High School in Sunset, Arkansas in 1957.After graduating from high school, Artis, with Dorothy Real, had a daughter, Shirley. He and Dororthy maintained a respectful relationship until his homegoing.

In the early 1960's Artis left Arkansas to explore the United States. He settled and worked in Chicago in the early 1960s where he entered the restaurant business, working his way up from busboy to the professional cook in top-flight restaurants such as The Pump Room. He enjoyed telling stories of his interactions with guests that ranged from major corporation CEOs to famed teamster, Jimmy Hoffa. Afterwards Artis made his way to a pastry school in Indiana and to visit his sister Magalen in Philadelphia. During this time, he began apprenticing with German and Swiss bakers and met the love of his life, Ruth. In 1967, Artis and Ruth married and 2 years later had a daughter, Arica Nicole

Artis was devoted to his friends and neighbors. He served for a number of years as a deacon at Berachah Baptist Church under Rev. Dr. Shine. Artis also performed in a few all-male gospel choirs at churches in Philadelphia. Among his favorite songs was "I Saw the Light"

Memorial Services will be held at a later date to be announced.
Read Less

We encourage you to share your most beloved memories of Artis here, so that the family and other loved ones can always see it. You can upload cherished photographs, or share your favorite stories, and can even comment on those shared by others.

Posted Jan 09, 2021 at 06:01am
Artis was the Humphries' neighbor on Hansberry St. In Germantown area of Phila for years. Him, Artis, my uncle Harvey and now, brother n law were considered "The three Musketeers! They were extremely close and also to the entire family. After marrying my cousin,Ruth, he remained apart of the family until hid passing. Artis is sorely missed and will always remain in our hearts.
The family is in our prayers and we are here for you as you desire!!!
Love you much
Sunomia and Family
Comment Share
Share via: 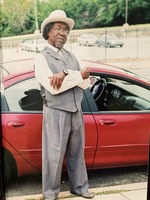