To share your memory on the wall of Larry Johnson, sign in using one of the following options:

Larry was the most genuine, kind hearted and fun-loving man. He was an avid golfer spending his time emulating Jack Nicholas at the Cavaliers Country Club. Larry also loved the water; from young surfer to navy man - Larry logically progressed into a proud powerboat owner and captain. On board his 40ft. Chris-craft cruiser, “Momma’s Paycheck” we spent many a summer navigating the Chesapeake bay in search of good times and bushels of the largest blue crabs we could find. In the winters Larry and Janice took respite exploring the sugar sands and warm turquoise waters of the Caribbean islands. Larry was originally a dog guy, but a precious cat person after that one time a cat stumbled on to the boat and captured his heart forever more. At the time of his passing - Larry was serenaded by the hospice angels singing “Anchors Aweigh,” Jimmy Buffet, and Willie Nelson tunes.

We encourage you to share your most beloved memories of Larry here, so that the family and other loved ones can always see it. You can upload cherished photographs, or share your favorite stories, and can even comment on those shared by others.

Posted Mar 08, 2021 at 06:50pm
Larry, Cindy and their parents were my neighbors in Kiamensi Gardens many years ago. Our parents were friends and were at many parties my parents wound have. Several years later Larry walked into my office where I worked. I recognized him as soon as he said his name was Larry Johnson! What a conversation we had. What a shock to read this. He was too young to leave his family. May he RIP.
Comment Share
Share via:
JP

Very sorry to hear of the passing of Larry. He was a true gentleman and I enjoyed working with him over the years. We also enjoyed spending times with you and Larry at the many PHCC functions. He was fun to be with. We will keep Larry and your family in our prayers and thoughts. 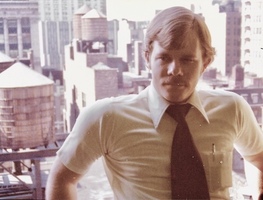