To share your memory on the wall of Paul Esterle, sign in using one of the following options:

Over time, he was instrumental in founding the Hoverclub of America, and started Venture Aero Marine where he designed and built hovercraft. His love of hovercraft transitioned to a love of boats and sailing as time went on. Paul was an accomplished woodworker and craftsman. He successfully completed multiple classes and held offices in the US Power Squadron. His love of pioneering technology and computers developed into a 30-year IT career that took him from Akron, Ohio, to Bristol, Tennessee and Boston, Massachusetts.

He loved to cook and had fun researching and preparing special themed holiday meals for his team at work. As an adult, model rocketry came back into his life. He built bigger rockets and went to permit based rocket launches. His love of boating led to trips to the US Sailboat show in Annapolis, and a transition from sailing a Matilda 20 to a Columbia 10.7. Soon, articles started flowing, and were published in SAIL magazine, The Nor’easter Magazine, Good Old Boat, and Small Craft Advisor among other publications.

He loved spending time working on the family boats on Holsten Lake in TN, and the North East River in MD. His passion and enthusiasm for boating grew from author, mentor, and participant in the Columbia Yacht Owner’s Association to his profession. Throughout his life, he also spent time carving half hull models related to the Great Lakes and building scale model boats related to the Chesapeake Bay. That love of all things nautical led to publication of books, and his role evolving into Editor of the Nor’Easter Magazine and becoming Technical Editor and columnist for Small Craft advisor.

Søren Kierkegaard said life can only be understood backwards; but it must be lived forwards. Sigmund Freud said, one day, in retrospect, the years of struggle will strike you as the most beautiful. As his health faded, his passion for doing what he loved only grew. These quotes capture the essence of Paul’s spirit. He was a dreamer, and lived the life he wanted to live.

For those wishing to make a donation in his honor, the family recommends the National Kidney Foundation, American Diabetes Association, or some other organization that you believe does good in this world.
Read Less

We encourage you to share your most beloved memories of Paul here, so that the family and other loved ones can always see it. You can upload cherished photographs, or share your favorite stories, and can even comment on those shared by others.

Posted May 22, 2021 at 05:20pm
Paul was my friend, mentor, and teacher (usually all three at the same time). His passing has created an enormous void that I will never be able to fill. From the time we went sailing on South Holston Lake in the middle of winter (40 degrees F) with one pair of winter sailing gloves between us, to the numerous Annapolis sailboat shows over the course of 25 years, I will never be at a loss for great stories that will keep his memory alive. It is comforting to know his legacy will live on in his and Pat’s two exceptional children, Becky and Eric. I can only imagine that “crossing the bar” was difficult, but Paul was a great Captain and sailor, and now he has nothing but fair winds and a gentle sea. Smooth sailing my dearest friend, Greg Little
Comment Share
Share via:
SM

Posted May 21, 2021 at 10:19am
Mr Esterle provided me two of his authored books...."Maintain and Improve Your Powerboat" and "The Latest News From Purgatory Cove." These were gifted after one of our conversations in the Frensenius Care lobby, while awaiting my Mother's Dialysis.
He was a remarkable Man and I shall value his words. Rest In Peace, Paul.
Comment Share
Share via:

Posted May 16, 2021 at 11:37pm
Fond memories of the Florida Boys & Girls Fall Fallout in Tarpon Springs. A lot of people attended that gathering. Cap'n Pauley and Pat stayed at our house. Pat got really soused on ouzo at Hellas restaurant. We sailed down the Anclote River with 14 people aboard my Columbia 31 Sanderling, some of whom had never sailed before. I got a lot of good advice from the Cap'n about fixing Sanderling's faulty old engine and other maintenance. I have several of his books and CDs. I am so sorry to learn of Paul's passing. Sincerest condolences to Pat and the family. Steve Gaber, Oldsmar, FL
Comment Share
Share via: 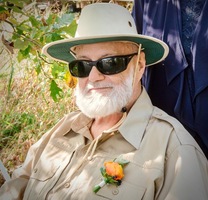