To share your memory on the wall of James Thorn, sign in using one of the following options:

Jim was a 1975 graduate of Conrad High School where he played football. He served in the U.S. Army from 1975 – 1979. Jim worked at Chrysler for many years and then at several dealerships. He was a member of St. Matthew’s where he coached several sports teams and spend many hours taking care of the gym. He enjoyed golfing.

Jim was preceded in death by his wife, Carol Thorn and his son, Ryan Thorn.

Survivors include his daughter Megan McMackin (Jim) and his grandchildren, Kaitlyn and Leah McMackin.

Services will be private.

We encourage you to share your most beloved memories of James here, so that the family and other loved ones can always see it. You can upload cherished photographs, or share your favorite stories, and can even comment on those shared by others.

Posted Mar 28, 2021 at 02:28pm
So sorry to hear about the passing of Jimmy. His family were friends of our family growing up. He was always a likable guy with a twinkle in his eye. We lost touch with him after the passing of his parents. Lots of prayers and love to Megan and family to get through this difficult time.
Comment Share
Share via: 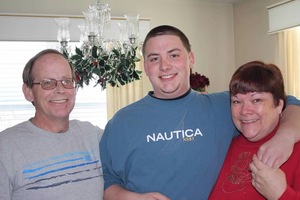